The Legacy of Martin Luther King

Martin Luther King is being honored today across the US.  MLK is a trending topic on social media, news outlets are rehashing stories about the Civil Rights movement and publicizing community events to honor the fallen leader.  Martin Luther King’s story is amazing and absolutely heroic.  But I feel like his legacy is being tarnished and Whitewashed.

Martin Luther King was a man that was beaten and imprisoned because of his protests against a tyrannical White supremacist government.  He was a Black man that fought for the rights of Black people and was surely motivated by concerns about the future of his own Black family.  He put everything on the line and died for his people. His movement was successful and created real and positive changes for Black Americans.

But we in America still live in a White supremacist, European centered culture.  Everything has to be not only accessible to Whites but centered around them.  That is made very clear by the historical retelling of MLK’s life.  He is said to be a man that wanted to bring the races together and bring about harmony in America.  He is also portrayed as a Confucius like figure.  I think that narrative is a lie to get White Americans to buy into his legacy.

First of all when you talk about race relations in America you need to think of hammers and nails.  Whites are the hammers.  Blacks are the nails.  The hammers like to act as though there is an ongoing disagreement between two parties on equal footing.  That has not been the case.  Blacks have been getting hammered since the origins of this country and the Civil Rights movement just asked to give Blacks a break.  Give them a shot at the chance to pursue happiness.

When mainstream media talks the accomplishments and goals of Dr. King they act as if he simply wanted Black and White people to hold hands and sing kumbaya together.  He was not the simpleton that history and the mainstream media make him out to be.  He was a freedom fighter for Black American people that had suffered centuries of oppression in the US.

He fought for displaced people that did not truly have a country of their own.  He fought for descendants of African slaves that were prisoners of this country.  Dr. King did not fight and die simply so Blacks could have White friends or land a date with a non Black person which is the story that is being sold across the world today through the American media and American public schools.

The same thing has happened to Nelson Mandela.  He was a brave freedom fighter that fought for Black people in South Africa and won basic rights.  Mandela is also being marketed as a Black man that dreamed of a rainbow nation and wanted to bring about so called racial reconciliation.  This version of history is a lot easier for White people to digest because they are not confronted with their own past.

Since Donald Trump was elected as president in the US I have observed that the media sympathizes with racist notions that affirm White supremacy.  The media typically portrays Whites as heroes or victims.  The stories of the Civil Rights movement can not be accurately told and still portray Whites as heroes or victims.  So the truth is being rewritten. 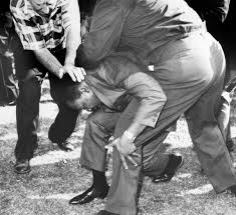 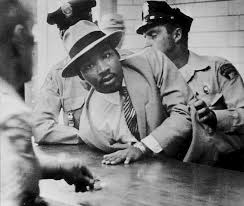 It’s also dangerous to Black people because it gives them the message that your prosperity lies in other communities.  Most African Americans do not really want to be independent from White tyranny and they don’t believe that Black communities can be self sufficient.  The bogus retelling of history reinforces the notion that Black people need other communities, especially Whites to survive.

I’m very unsure of what is being taught in American schools today.  But I urge everyone to seek out information on the American Civil Rights movement.  Remember to focus your attention of the Black community because those are primarily the people that stood up to American authoritarianism and made modest gains in order to improve their lives, communities and the futures of their children.  As a Black American woman I am grateful for their struggle.

One response to “The Legacy of Martin Luther King”