Summer 2019 is behind us and you know what, I didn’t do a darn thing. I didn’t visit one beach, pool or amusement park this year. My “Hot Girl Summer” consisted of going to work, going to church going to brunch a few times. All of my adventures and drama came from reading. That’s a good and bad thing at the same time. Ice could have been covering the ground and it would not have made much of a difference to me. I’m going to share and review what I read this summer. 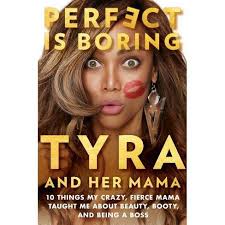 I read Perfect is Boring this summer by Tyra Banks and her Mama Carolyn London.  I didn’t really like this book.  I just read it because I’m a Tyra fan.  Carolyn’s contributions are better more interesting than Tyra’s.  If you’ve followed Tyra’s career there is nothing new here.  Tyra gets on the same self righteous, slightly misguided soap boxes in this book as she did on her talk show and as she does on America’s Next Top Model.

For decades Tyra has been telling women to embrace what they perceive to be physical imperfections meanwhile she has made millions because she is aesthetically pleasing.  It’s not her place to speak because she doesn’t know what she’s talking about.

Tyra is well meaning but watching her tell women on ANTM to embrace their “flaws” is counter productive.  It’s always bothered me that on all but perhaps the first few seasons of ANTM  there has been a so called plus sized model that is perhaps a size eight.

The latter cycles of ANTM have focused on the fashion model hopefuls and their insecurities.  So here we have women that had what it takes to be on a TV show about modeling being coached to be confident by an international super model.  Tyra thinks she’s being relatable but she’s nauseating.

I really am a fan though and I’ve watched every of ANTM and I watched her talk show daily when it came on.  Tyra is weird and kind of annoying but I love her and I’ve hung on her every word since the mid 90s.  But this book was still disappointing.

None of that happened in this book.  She just wrote about self esteem and self respect.  I found it to be pretty dull but if someone got something out of it that’s great.  Tyra’s mom Carolyn briefly told her life story in the book.  I’m familiar with Carolyn because she’s made appearances on ANTM.  Her story is truly inspirational.

Carolyn was a young naive mother of two children.  She is a hard worker but most of all she is smart with good instincts.  Carolyn’s smarts and artistic talents are what got Tyra to where she is today.  She is a very talented photographer with an eye for fashion and style.  And she was good at strategizing.  Carolyn is a woman that got ahead by being smart and putting well thought out plans into action.  I think she could be an inspiration to a lot of women.

Fun fact.  A few years ago I read about a woman giving her young daughter a period party when she started menstruating.  She probably stole that from Carolyn.  Carolyn did that for Tyra when she began her lady’s time and she wrote about it in Perfect is Boring  Carolyn said that she was very naive about sex even after becoming pregnant and she wanted her daughter to be informed and have a good understanding of her body.

I can’t say that I would recommend this book even if you are in middle school.  I’m sure there are better literary choices you can make.  But if you do decided to read it save time and skim past Tyra’s parts and jump to Carolyn’s passages.  If you’re a die hard Tyra fan you may enjoy this book.  It’s kind of like calling an old friend.

I am a sports fan, reality TV historian, spinster, clothes horse and a believer in Christ. I hope you enjoy my blog. My You Tube channel is SKC. My Instagram is @showmeshannon. View all posts by shannoninkansascity