Fantasia Barino, Gabrielle Douglas and Nicki Minaj have all made traditional remarks about womanhood over the last few years and have all faced criticism and mockery for it.  There is irony in all of the statements made by these well known women however it doesn’t necessarily make the viewpoints invalid and I don’t understand the so called backlash for their remarks. 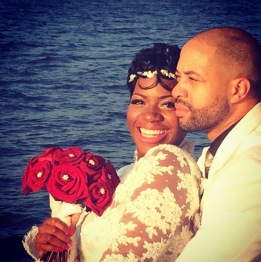 Fantasia Barino of American Idol fame set off a poop storm this week when she said she follows her husband’s lead.  Her husband chimed into the on line discussion and he made a lot of good points about male leadership in a family.  They made sense and I think this couple is correct in their point of view.

But Fantasia’s public statement upset feminists for some reason that I don’t understand.  Some critics said that Fantasia was being arrogant and looking down on unmarried women.  But we’ve known Fantasia a long time now and she’s never been condescending or pretentious so I don’t think that judgement is fair.

Some of the disagreement stems from the fact that Fantasia makes way more money than her husband.  The pundits have a point there.  Oh and he’s a felon that she married after three weeks.  Fantasia’s marriage definitely raises some eyebrows but I still agree with her opinions about heterosexual, traditional marriages.  Even if I didn’t agree with Fantasia and her husband I would just excuse it as a difference of opinion.  But the feminists are angry this week at the thought of submitting to a man that they chose to marry.  I don’t get it.

Olympic gold medalist Gabrielle Douglass made a tweet a few years back saying that women should dress modestly.  Twitter erupted into a fury.  Gabrielle was maligned for this statement.  The feminists mocked her religious background and of course they brought up sexual assault.  The Twitter mob insulted Gabrielle’s intelligence and implied that she was brainwashed and didn’t think for herself.

I’m trying to understand what’s wrong with valuing modesty.  Do we all need to seek validation by posing mostly naked on social media.  Some women think that is empowering.  I don’t but to each their own.  No one is hurt by Gabrielle Douglas wanting to wear clothes.  I understand that Gabby Douglas came to fame in a leotard in front of a global audience so it is a bit of a hoot hearing her promote modest dress.  But again, I think that she is absolutely correct.

Nicki Minaj recently decided to retire and focus on her upcoming marriage and starting a family.  I think it’s lovely.  That move made Nicki a feminist heroine to me.  I believe that a woman can have it all in her life but she probably can’t do it all at the same time the way men can.

Nicki has had a great deal of success and has made a lot of money and now she wants to place her focus on being a wife and mother.  This is another questionable relationship.  Nicki too is marrying a felon that she out earns by a mile, maybe two or three.  He wouldn’t be my choice for a mate but nonetheless he’s her man and I think it’s nice that she is making family life her priority.  I hope she gets everything she wants.

There was a lot of social media buzz surrounding Nicki’s comments.  Most of the commentary was negative but there were some congratulatory wishes.  I don’t know why anyone would have any negative feedback about a wealthy woman in her thirties pausing her career to begin a family life.  I think it would be foolish to try and balance both.

The world has a one dimensional view of Black womanhood and it is mostly negative.  The world is very comfortable with Black women spreading promiscuous and new age feminist messages but not family oriented values.  I’m not sure why that is.  I tend to believe that things we see in the media groom those that consume certain images and messages.  Certain segments of the population are being groomed for failure from the start.

Black women are seen as traditional and wholesome once they are past their prime.  I think it’s great to see young, attractive Black women expressing wholesome values while they are young.  It’s a shame that their biggest detractors seem to come from within the Black community.