Recently rapper TI remarked on a podcast that he took his daughter to a gynecologist yearly and had the doctor check to ensure her hymen was still intact.  This is supposed to prove that the eighteen year old girl has never had sex.  All families operate differently and what is peculiar to one family may be acceptable in another.

I found TI’s admission to be a bit Taliban like and I was shocked that he was so comfortable telling the world about this daddy daughter tradition.  But TI has shot his mouth off several times in 2019.  As far as I’m concerned his daughter has joined a list of people and entities to whom TI owes an apology.

In my opinion there is more power for women in modest dress and morals.  But if a woman decides differently for herself I am no one to tell her differently.  An adult person has the right to choose what to do with their body.  I certainly don’t blame a parent for advising a young adult child to abstain from sex.  I would do the same if I was the parent of an eighteen year old son or daughter.

But to try an enforce abstinence with an iron fist implies that you are uncomfortable with that person’s sexuality.  It’s as if the enforcer sees sex as an inherently unclean and harmful act.  And here is the bottom line.  Overall, Black Americans and the world at large view Black female sexuality as nefarious and dirty.  Most people do not have a healthy view of Black female sexuality.  That even includes Black women and men.  Many Black men of Generation X and younger may have negative views of Black women and sexuality.  Being a hip hop star doesn’t make one exempt.

Just look at the music that many Black artists, particularly rappers such as TI have produced over the last thirty years or so.  Much of it is based on cheap sex, where the woman is not valued and the men seem resent the women.  R & B as a genre has slowly been phased out of popular music so it’s rare to hear songs about sweet romances and healthy sexual experiences anymore.  What we are left with are tunes based on casual sexual experiences and the bitterness and anger that often accompanies them.

Black Americans are heavily influenced by mainstream American culture which always seeks to affirm White righteousness.  These attitudes do nothing to benefit Black people but many of us absorb and admire the dominant culture around us.  Many of us are desperately trying to assimilate to a culture that makes us the butt of jokes and places us at a disadvantage.

It is pretty unusual for Hollywood to cast a Black woman as a romantic lead or to address Black female sexuality and romantic relationships at all.  Black women are typically presented as matronly, undesirable and asexual by Hollywood.  Image makers know what they are doing when they place certain consistent messages before their audience.  Hollywood and the media seeks to neuter Black women.

I’ll point out that when the entertainment business does address Black, female heterosexuality the Black woman is usually presented as desperate and her desperation or failure at relationships is comic relief or fuel for a story line about her suffering.  It is very rare to see a Black woman, that looks like a woman with two Black parents in a loving, stable relationship in the media.

Black women, particularly those with dark skin and kinky hair are fed a steady stream of negativity about what they look like through the media and often personal interactions.  I believe that this is a deliberate attempt to control Black female heterosexual activity.  It’s the ultimate c—block.  There are many within the Black community that are in on the act.

Undoubtedly, TI has taken advantage of and abused (I don’t mean criminally.  I have a broader definition of abuse.  What many call normal sexual behavior in the modern era I think of as abusive.) numerous women.  Because of his own behavior he now has an unhealthy view of female sexuality.  TI doesn’t even seem to have a respectful relationship with his own wife. 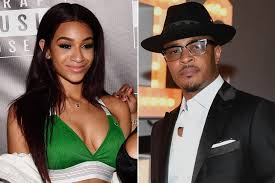 Safety, comfort, acceptance and trust are what set the mood for a woman to have a healthy sexual relationship with a man.  These conditions are what give women the freedom to express themselves sexually.  Unfortunately, Black women are not offered these conditions and this freedom as often as women of other communities.  So sex as it relates to Black women often comes with negative connotations instead of romantic, pleasurable, affirming ones.

People seek to control acts that they see as nefarious and vile.  Black, female, heterosexual behavior is seen as unwholesome and dirty under the global system of White supremacy.  Therefore, it is seen as something that needs to be monitored and controlled with no thought to the well being of Black women.