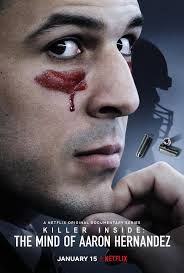 I watched the three part documentary Killer Inside:  The Mind of Aaron Hernandez which is about the late New England Patriots tight end and convicted murderer (well kind of) Aaron Hernandez.  Aaron Hernandez is an interesting person to say the least.  His story is almost Shakespearean.  I remember Aaron Hernandez’s football career very well and I’ve seen several pieces about him in the media before watching the Netflix documentary.  But Killer Inside offered some new information.

Family dynamics are interesting and Aaron’s family was full of complicated relationships.  Aaron grew up a male dominant household.  His father is Puerto Rican and seems to be very traditional.  Aaron looked up to his father and was devastated by his death.  He had a very close relationship with an older female cousin who loved Aaron like he was her own son.  She was a mother of two children dying of cancer and served a prison sentence instead of testifying against Aaron.

The female cousin was married at one time and her husband left her for Aaron’s mother after Aaron’s father died.  Aaron had animosity and resentment towards his mother because of her new significant other who sat next to her during Aaron’s trial.  Aaron had a male lover who was featured in the documentary.  Aaron also had a faithful fiance who was the mother of his daughter.  Her support for Aaron never wavered.

I think it’s telling that Aaron allowed his cousin and fiance to suffer for him.  He seems to be very self centered and without a conscious.  We’ll never know if his sociopathic behavior is the result of nurture, CTE or celebrity privilege.  The film implied that Aaron was driven to homicidal madness due to having to hide his same sex attraction while being immersed in the hyper masculine culture of sports.

Aaron was convicted of killing a man named Odin Lloyd in cold blood.  Odin Lloyd was his fiancee’s sister’s significant other.  Aaron appealed his sentence and later hanged himself while incarcerated and awaiting for the chance to appeal.

A Massachusetts law states that if a person dies while on trial there will be no conviction on the record books.  Therefore, Aaron Hernandez is not a convicted murderer.  He was also accused of killing two other men in Boston but was not convicted.

Aaron Hernandez was a brain damaged, bisexual, homicidal street thug, a football star who was a part of a sports dynasty with the undying loyalty of two women, a contemptuous relationship with his own mother and a father of a young girl who committed suicide at age twenty seven.  His suicide may have outsmarted the Massachusetts legal justice system.  Aaron Hernandez was not a sympathetic character but he was nonetheless compelling.  Killer Inside:  The Mind of Aaron Hernandez was an interesting film even if you already know quite a bit about the man.

I noticed a theme in a few 1990s music videos.  Derelict buildings were used as the back drop for a lot of the videos of the time.  I researched my theory and I realized that the  musical group Prodigy is responsible for a lot of that imagery.  It looks like all of their videos were made on the same dank set.  But aside from Prodigy a few others used similar images.

I’m not going to hypothesize why this is.  I don’t know that there is a why.  Sometimes a thing is just a thing for no particular reason.  So here’s my collection of 90s videos with dark, derelict imagery.

I don’t listen to much alternative rock but I enjoyed this song and remember the video playing in MTV very well.

This is borderline.  Natalie’s apartment wasn’t that bad.  It just looked like an urban hipster apartment.  This video probably started the urban gentrification of American cities.

Whose house is this?  Did they break in and start performing their choreographed routine?

Lisa brought a feminine touch to this empty, raggedy apartment.

This video is creepy and sexy at the same time. 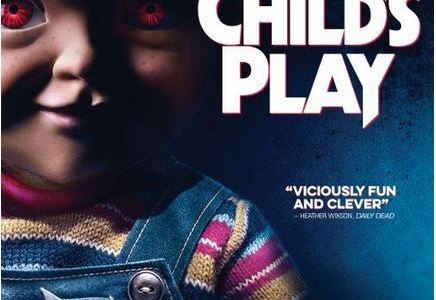 I recently watched the 2019 remake of the 1988 film Child’s Play.  I saw the original Child’s Play when I was a teenager.  Just about everything from the 90s is corny so I didn’t have very high expectations for the film.  I didn’t care for the new Child’s Play.  The film was ridiculous then and it’s worse now.

If you’re not familiar with the plot of the film, Child’s Play is about a homicidal, red headed doll named Chucky that causes chaos for a single mother and her son.  In the 80s version Chucky was possessed by the spirit of a hardened Chicago criminal. 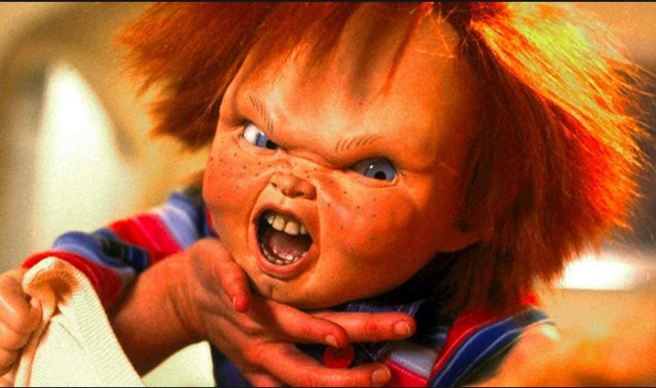 In the latest version Chucky was installed with artificially intelligent software and was programmed by observing things in his environment.  I there was a part in the film where the Chucky doll that went crazy was hexed in the Asian factory where he was manufactured by a disgruntled employee.

Chucky is eager to please his owner Andy and is very possessive over him which spurs part of the killing spree.  But some of the murdering happens without any provocation whatsoever.  Chucky just goes off on people and starts doing crazy s—.  Early in the film it is established that Andy has a hearing problem.  I don’t know why they writers added that because it played no part in the film whatsoever.

Not only is this film franchise a negative depiction of red heads but there are some very negative depictions of Black people in this movie.  That could be an essay within itself but I don’t feel like editing clips.  Trust me, the Black roles in this film are cringeworthy.

After several gruesome deaths and thousands of dollars worth of property damage the film ends because Andy’s mom twists the dolls head off.  Much like in the earlier film I don’t know mom didn’t destroy the doll in the first place.  The film moves along quickly though and seems short even though it is two hours.  I can’t recommend that you spend two hours of your life on this movie.  But if you enjoy corny horror films you may enjoy Child’s Play.